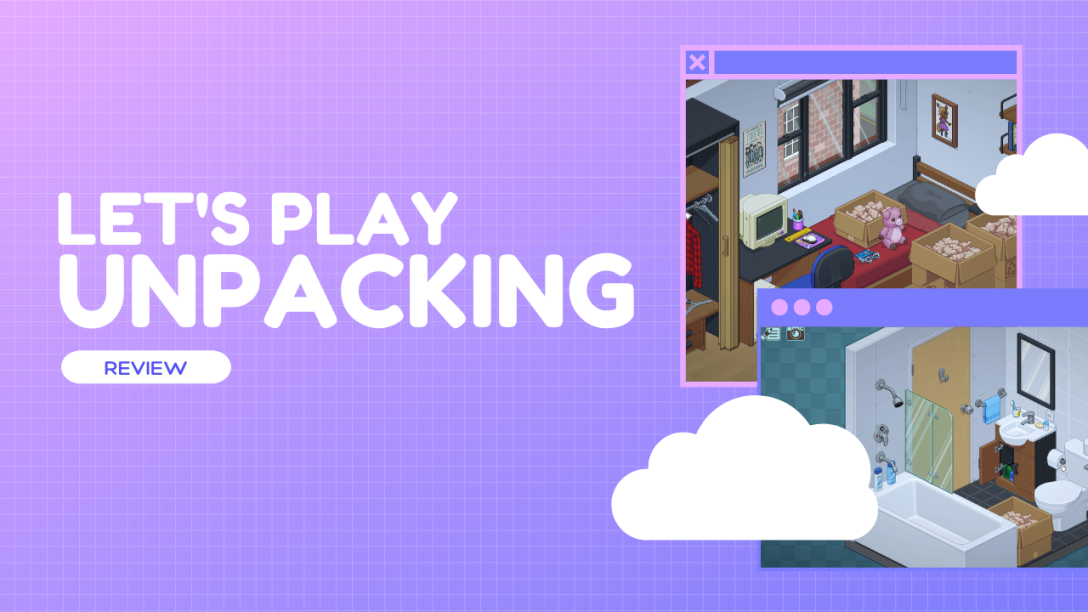 A game about a life told through the act of unpacking it — and about queer joy.

When you play Unpacking, the game is telling you its story without words — well, except for the caption jotted into the photo album at the end of each chapter. Aside from that, the story is told entirely through the player’s actions and… sound. The rustling of the moving boxes and the packing paper, the satisfying clunk of an object being set down on a surface.

Psst: if you’d rather listen to or watch this review, you can find it on YouTube:

As I played this game through to the end for the first time this month, I also played it for review — the entirety of my playthrough is up on YouTube (see video below), and I also wanted to write about my experience of it for Rainbow Bookshelf. That meant deciding how much or, indeed, how little of me was supposed to be present. I decided that there would be no face cam, no commentary, just the gameplay, so it might serve as a walkthrough as well as a little movie of sorts.

When you’re playing it for an audience and you, the player-streamer are absent, there is a meta layer to the gameplay, but as the game itself, that layer functions entirely without words. So as I was playing this game for an audience but essentially without one, there were actually only a few moments where I wanted to make my presence known. I was happy to be absent for this, in order not to take attention away from the story and its characters.

This playthrough is not about me — but sometimes, it was about those sparking moments of queer joy. When I first found the rainbow socks in the protagonist’s moving boxes, I couldn’t say anything. Or, well, I could have turned on the mic, but I didn’t want to. So I just rapidly picked them up and put them down a few times, making them jump up and down — for joy, same as my heart was. And hopefully, the viewers will see and recognise it.

But there’s moments of frustration, too: lingering on a difficult decision because it either meant compromising the protagonist’s identity, or simply not wanting to… well, I don’t want to spoil it.

The game uses everything at its disposal to tell its story. This includes not only the items in the moving boxes, but the space itself: is it a blank slate, or are we moving in with someone? Do we feel welcome there, or is the environment telling us — telling the protagonist — that this isn’t going to work. The stark contrast in narrative especially when it comes to sharing space works so well and tells such a huge story. The dorm room, the house-share, the moving in with a partner for the first time…

Unpacking is a game about joy, about growing up and finding oneself, a story told entirely through the memories and souvenirs we pick up along the way. But it’s not only the knickknacks: it’s the tools and the paths we choose, too. Realising dreams that began all the way back in our childhood bedroom.

Unpacking is a short game: it takes about three to four hours to complete, with eight chapters in total. As the game goes on, these levels get more complex — literally, because at the end you are no longer consigned to one floor, much less one room. And our protagonist notoriously packs the toilet paper with the kitchen sink, so good luck. (Which is lethal for my ADHD-adjacent brain, because I will get sidetracked and start unpacking the bathroom boxes instead of hopping back into the kitchen… never mind.)

There are constraints: certain items belong in certain rooms, but 99% of the time, it’s common sense where things are meant to go. It’s the 1% you have to watch out for: items that can only end up in very few places — and with them, the story is told through discovering where they have to go, where they cannot go. The story lies in what aspect of emotion, of memory, goes into that place with them.

It can be played with a controller on PC, but I almost preferred using the mouse for a sense of immediacy as well as the look and feel of a good old point & click adventure, of which I’d played precious few recently. The wonderful soundtrack lends a lightness and lo-fi vibe to the experience that turns the usually oh-so-frustrating-and-stressful experience of moving house and shifting everything you own into something one almost doesn’t want to end. I would have happily played more chapters — but then again, ending it where they did allowed the creators to infuse the ending with so much contentment. It’s a point of closure, but it also opens another door: and we’re invited to imagine how the protagonist’s life may continue past this set of moving boxes.

The art style of cute pixel art is familiar in its simplicity, but look out for which books, game cartridges and discs or DVDs you’re holding: a labour of love, clearly, recreating famous titles and having them be recognisable even on a small screen. Another delight is the sound design; not only the music but the thousands upon thousands of sound and foley effects used to have items tink and thunk into place. I managed to restrain myself for the review playthrough, but it’s a great joy running around and setting items down on any and all available surfaces, including in rooms where they absolutely should not be. The developers clearly anticipated this and made sure to differentiate and include even those sounds.

There’s photo mode: being able to apply filters, frames, and create a personal scrapbook of the rooms you put together, beyond the automatic cover photo the game adds to the chapter photo album is a serious, adorable time-sink. With special actions and achievements, the player earns stickers that can be added, and it’s not only that that adds replay value to the game.

Perhaps it’s the competitiveness of wanting to get each map right on the first try, with no items out of place in glowing red silhouettes; perhaps it’s the completionist urge to get all of the achievements. Making the mannequin dab is easy, but what about the fridge magnets? As I’m writing this, I realise I didn’t get them the second time around. There’s other things I remembered only afterwards: I put the toothbrush mug into the kitchen! In my defence, the game didn’t pull me up on my blunder.

And then, there’s simply the fun of decorating the rooms differently than last time, or finding the perfect setup in a game of bathroom cabinet Tetris.

If you like gentle game experiences, if you just want to lose yourself in an adorable world for a few hours, or if you’re completely new to games and you’d like to give this a go: Unpacking would make a wonderful choice. Not least for some queer joy. Happy Pride, everyone 🌈

And here is my entire playthrough, without commentary, just me unpacking stuff:

Processing…
Success! You're on the list.
Whoops! There was an error and we couldn't process your subscription. Please reload the page and try again.

This site uses Akismet to reduce spam. Learn how your comment data is processed.